How to Use Duplicate Annihilator and PowerPhotos Software

Although there are three Brattoo Propaganda apps, you are recommended to merge libraries and use Duplicate Annihilator for Photos. However, if you are not migrating to Photos app and only need to delete duplicates in iPhoto library, Duplicate Annihilator for iPhoto will do the task. Given that the key features of the three Brattoo Propaganda apps do not differ, the ‘how to use’ part of the review will focus on the app for Photos.

Start by downloading an installation file from the developer’s official website. Then, unmount the downloaded package and follow instructions in the installer. To scan your photo folders, use the Find Duplicates tab. In the tab, click the Find and Annihilate Duplicates button, which will initiate a live scan based on the preference settings.

When the scanning process is finished, you will be presented with the summary information about the process and the number of items marked as duplicates. From there, you can either move photos or remove them altogether. You can apply several filters such as size, creation date or file type by using the Preferences tab. 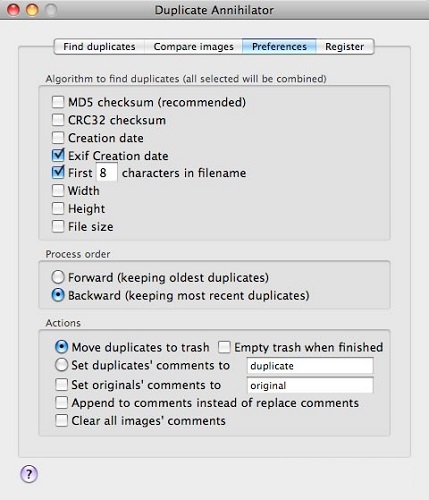 When hunting down identical images, it is recommended to apply exif creation date filter. This filter will help you to find HDR images because they keep metadata when modifications and copies are made. Turn on the Magic mode of the duplicate manager in the Find Duplicates tab to find missing duplicates that were created during import. If you wonder “Does the scan work too slow in the Magic mode?”, the answer is “No.” However, it is more precise than the custom mode because it relies on the use of checksums only.

To search your Photo library with the help of PowerPhotos, download the app from the developer’s website. Unmount and install the app. Then, click on the magnifying glass in the toolbar to initiate a duplicate search.

Select a library you would like to search from the library list in the left pane of the app. Drag the library to the white area of the window labeled Choose Libraries to Search. You can remove a library by clicking the X button. It is possible to exclude certain images from the search by clicking the Exclusions button. In a window that opens, indicate types of photos you don’t want to scan and click Done. 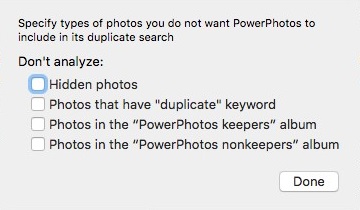 The app also allows making a quick comparison of photos to determine whether they are duplicates are not. Exact Match feature helps to compare two images directly in order to find byte-for-byte duplicates. Compare Original Photo is needed to compare unedited originals in Photos. Use Compare Current Photo feature to find images that have been edited in the same way. To select either feature check a box next to it in the Comparison Options section of the app. After the app has conducted scanning, you will be presented with its results in the main window. Here you can review the results and choose photos that should be left. 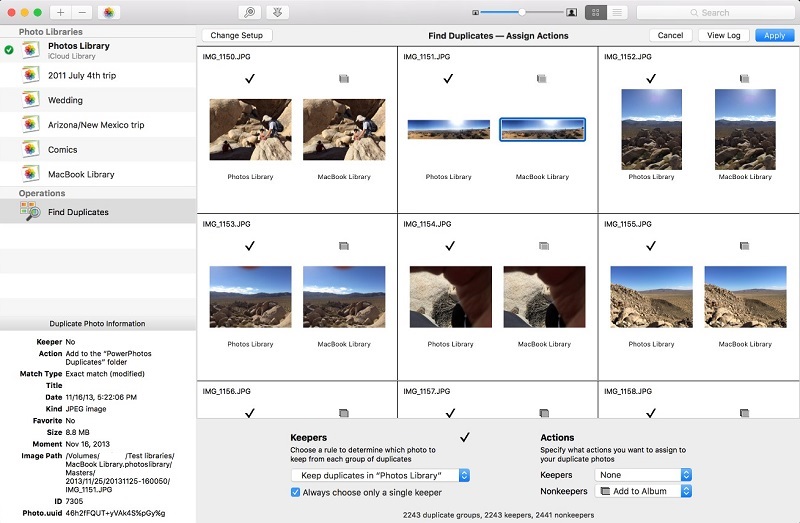 To delete duplicates, open PowerPhotos nonkeepers album. Then, use the command + A key combination to select all photos. Control-click on the group of photos and choose the Delete N Photos from a pop-up menu. 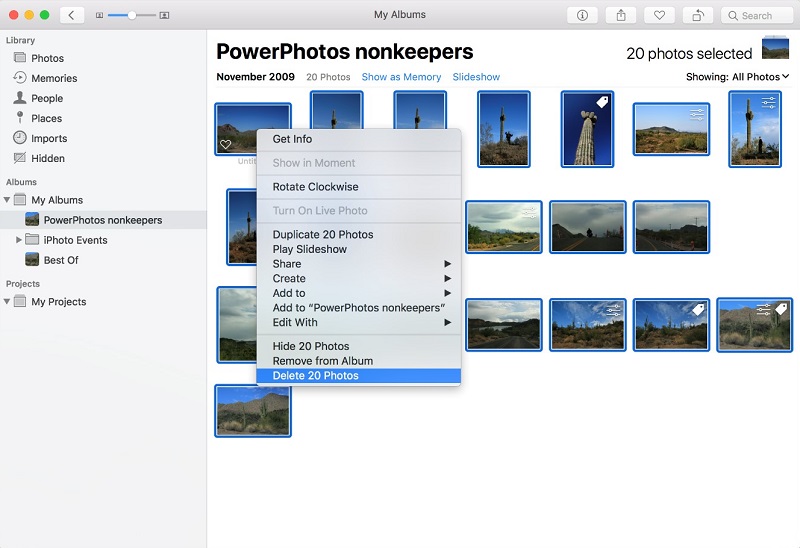 Duplicate Annihilator vs. Power Photos: Which One is Better?

Both apps use similar duplicate detection algorithms that rely on the comparison of checksum values. Therefore, they provide scanning results that are almost identical in terms of accuracy. However, when it comes to speed PowerPhotos performs much better than its counterpart. It took me more than 30 minutes to scan my library with Duplicate Annihilator. PowerPhotos, on the other hand, finished the task in under 15 minutes.

When it comes to customizable detection features, the two apps offer similar scan criteria. However, PowerPhotos allows searching images that have been hidden in Photos, which is a feature that is conspicuously missing in the app produced by Brattoo Propaganda product. Additionally, the app has more tools for library management than its counterpart. As for the prices of the duplicate cleaners, the app produced by Fat Cat costs whopping $29.95, whereas the one developed by Brattoo Propaganda costs only $7.95. If you are looking for a cheap way to remove duplicates from your Mac, then Duplicate Annihilator for Photos is your choice. However, if you are after a sophisticated utility that also has multiple library management functions, it is best to opt for PowerPhotos.

Is Duplicate Annihilator Safe? How About Power Photos?

Taking into consideration the fact that duplicate scanners are used to process a massive amount of personal information, it is important to know whether they are safe to use. After scanning Duplicate Annihilator and PowerPhotos with a commercial antivirus, it is clear that the two apps do not contain malware. Therefore, when installing them, you shouldn’t be worried about your Mac being controlled by maliciously intended individuals. The two duplicate cleaners are absolutely safe.

How to Uninstall Duplicate Annihilator and PowerPhotos

Getting rid of an app can be either easy or difficult depending on the type of software under discussion. When it comes to the uninstallation of Duplicate Annihilator and PowerPhotos, there’s nothing difficult about it. Here’s what needs to be done to uninstall the duplicate cleaner:

You can also use a third-party cleaning utility to ensure that all traces of the duplicator finder are gone from your Mac.

Duplicate Annihilator or PowerPhotos?
Total Votes: 18
* - added by visitor
×
You or your IP had already vote.